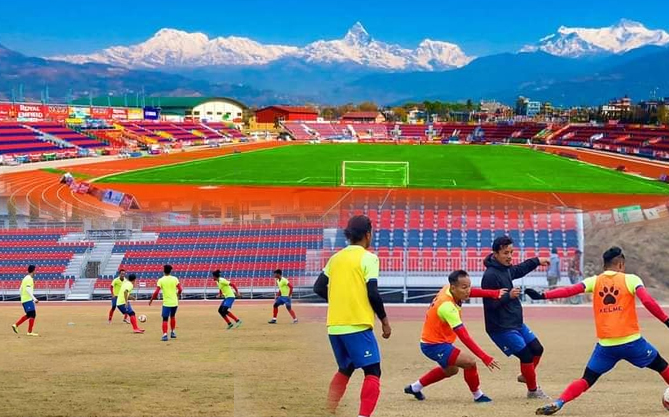 Nepal National Team training in Pokhara for World Cup 2022 Qualifiers matches. Gorkhali team are training in the Pokhara Stadium under the coaching of Bal Gopal Maharjan. This is going to be a new environment with ‘refreshments’ for the national team.

In the qualifiers of 2022 World Cup in Qatar and the 2023 Asian Cup in China, Nepal has three matches to play. Nepal will host Chinese Taipei on March 25 and Australia on Match 30. In the last match of Qualifiers Gorkhali will play against Jordan in the mont of June.

With 3 points Nepal are in the fourth position of Group B of the Qualifiers. Nepal added three points defeating Chinese Taipei 2-0 in the away match. Australia are in the top of the table with 12 points. Nepal’s remaing three matches will be played in Dasarath Stadium, Tripureshwor, Kathmandu.

Before facing Chinese Taipei and Australia in March Nepal will play friendly matches against Qatar’s clubs. For the details of friendlies against Qatari clubs, you can click here. Similarly, ANFA is also trying to host a 4 nations tournament before the qualifier matches.